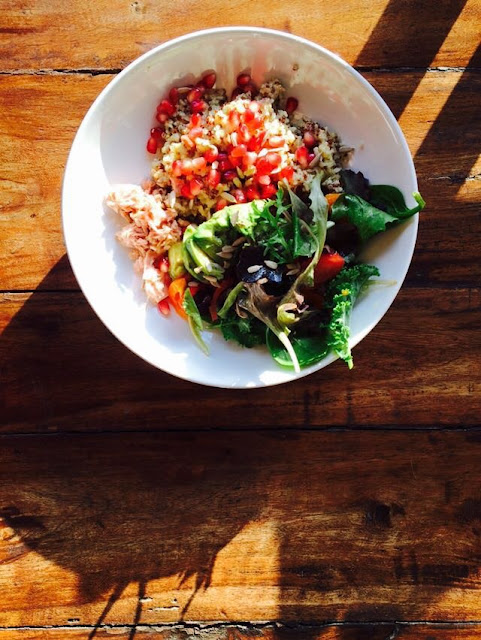 My mother also consented my drinking of brandy-spiked tea. I feel fabulous.

Then we came home, ate this AMAZING chewy-crunchy-sweet salad bowl and I tried to do some economics. LOL. I actually just procrastinated and looked up Deliciously Ella's sweet potato brownies and drooled. Ahhh.

But Easter break is so so so so so soon and I am ver ver excited. I still have a ton of studying to do, cause of mocks, but still. I re-met the cutest boy yesterday and I am almost done with Pride and Prejudice, and I must admit, kudos to Jane Austen because I am frigging in love with it. I know half the world is, too, but c'mon, classics are supposed to be the books everyone LOVES but has not actually read. But read Pride and Prejudice! Elizabeth is smart and insightful, Lydia is annoying, and Darcy is just... a cross between a cold fish and a warm lil sexy toast.

See you guys soon + love you!

1. Cook quinoa according to packet.
2. Throw raisins in five minutes before its done.

For the salad:
Lots of spinach or anything green
1/4 cup pomegranates
Handful of cherry tomatoes
An avocado, sliced

For the dressing (+ lots of leftovers; keep it in the fridge for other salads):
1/4 cup mustard
1/2 cup olive oil
Salt & Pepper

1. Dress salad and serve with quinoa. Drop some almonds on the top, or serve with tuna, if you want!

Email ThisBlogThis!Share to TwitterShare to FacebookShare to Pinterest
Labels: mains